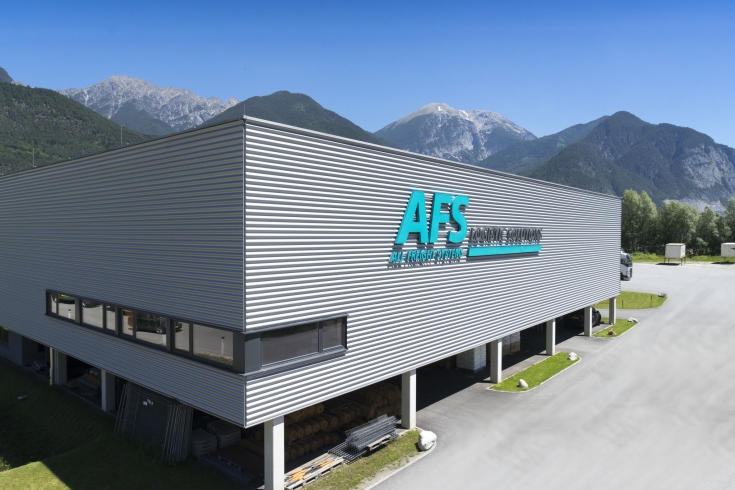 Thanks to its bases in Zirl, Wals and St. Margrethen in Switzerland, AFS is a regional logistics partner within the entire alpine region – modern, uncomplicated, process-optimized and more than just competent. The company has already been in existence for 20 years now. . This brings plenty of experience in relation to the best transport solutions for the respective customers. Custom-made service, so to speak. At about the same time as the relocation to Zirl in 2014, the starting signal for an intensive cooperation with Electro-Terminal, especially in the areas of personnel, internal logistics and quality control, has led to a high level of synergy effects. Increases in turnover and a continuous growth on both sides illustrate that the cooperation is a fruitful one. As a result of this AFS could also win well-known customers from the field of industry.

„Big enough to handle, small enough to care" – the motto of AFS actually says it all. Thanks to a world-wide network of partners, customers and industry-specific system solutions for all steps of the process chain, can be created . Local businesses are also active far beyond the national border and require  a partner, who knows the local as well as  foreign customs . This requires a high level of trust. It is no longer only about organizing the flow of goods. It is about service in the truest sense of the word. This strategy makes AFS one of the top players among the complete-service providers of the industry. And the logistics company remains consistently owner-managed. Its founders Johann Stark and Martin Köcher are still at the helm of the business and lead it from its  successful past into  just as successful a future, since the order books  are full  of appointments. There are so many orders, that only two years after the relocation from Innsbruck to the nearby village of Zirl it is expanding again. Altogether new logistics and storage areas with appropriate infrastructure are built on an area covering 2,000m² and on two levels.  Additional warehouses off the premises already have to be rented now. . Once the annex is completed they should be reunited at one location. This ensures short distances and  even closer-meshed processing.

Investments for the Future

“Sooner or later it was always clear that we wanted to expand the location”, said Köcher. “When we moved to Zirl, we had already secured suitable grounds, so that the expansions could be made without any major problems. We believe in the business location of the Tyrol and that is why for us it is a matter of course to invest here.” AFS presents itself as  future-oriented with the new building. On the roof the new hall a solar system will be installed to produce a high share of the electricity required . And this solar system is also being considered for charging the electric cars, which are planned to become part of the company’s fleet.

It takes two to get on well: Based on decade-long business relations, AFS-All Freight Systems and Electro Terminal have been business partners for ...

Since 2015 we have supported the “BiodiverCity” project – a cooperation with the Tyrolean education authority for vocational training schools, ...